The Nebraska Daylily Society (NDS) invites you to join us on Friday, July 5 through Sunday, July 7, in Omaha, Nebraska, for the 2019 AHS Region One Meeting. Click HERE for the registration form with fillable fields—you can use your computer’s keyboard to type your information—no handwriting is necessary!

Did you know Omaha is known for its wide variety of restaurants per capita? Extend your visit, and enjoy some of Omaha’s diverse dining opportunities during your stay. Dining establishments listed below are examples of the many eateries in Omaha, no endorsements are implied J.

Restaurants in the Omaha’s Old Market District and Downtown

Near the Henry Doorly Zoo, Lauritzen Gardens, and downtown, the Old Market offers dining, art galleries, museums, live music, a walking tour, and more. Click HERE to learn all about all the Old Market has to offer, including information about several restaurants (list below is just a sample of dining opportunities in the Old Market and downtown).

Don’t miss visiting these dining destinations in metro Omaha during your visit. These are not chain restaurants, although some feature multiple metro locations. List below is just a sample of what Omaha has to offer.

Just a Short Drive from Omaha—Lied Lodge in Nebraska City

Lied Lodge in Nebraska City is about an hour’s drive south of Omaha. Extend your stay, and spend the night at this magical place. Sunday brunch, served in the Timber Dining Room, is outstanding. 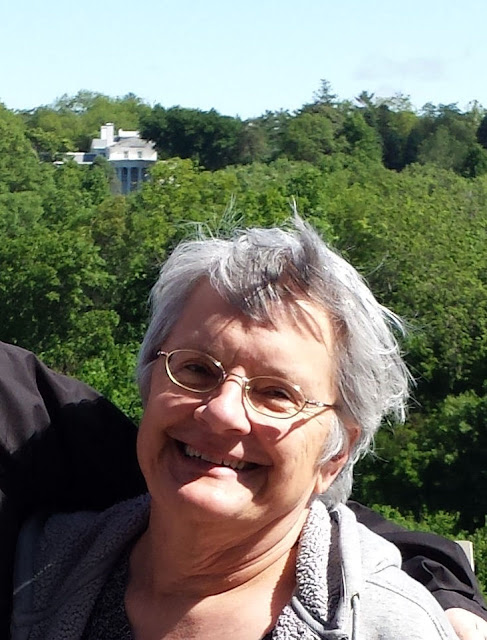 Mary Baker on the deck at Lied Lodge in Nebraska City. Historic Arbor Lodge is in the background.

Celebrate daylilies with us in Omaha on July 5-7. Visit with friends and meet new ones while we enjoy beautiful daylily Fireworks in the Gardens—don’t let the only thing missing be you!

Posted by Mary Baker at 1:43 PM No comments:

Fireworks in the Gardens
Omaha, Nebraska • July 5-7, 2019
Hosted by the Nebraska Daylily Society

The Nebraska Daylily Society invites you to attend the 2019 AHS Region One Meeting “Fireworks in the Gardens” on July 5-7 in Omaha, Nebraska, where you can meet and greet guest speakers Charles and Heidi Douglas and enjoy their wonderful daylily presentations in person.

Click HERE for the regional meeting registration form with fillable fields—use your computer’s keyboard to type your information—no handwriting is necessary!

Charles and Heidi met at the Mid-Winter Symposium in Chattanooga in 2003. In 2006 they became a couple. Ever since then, they share their passion for daylilies with anyone who will listen. Charles and Heidi enjoy traveling the country speaking to clubs and making new friends. 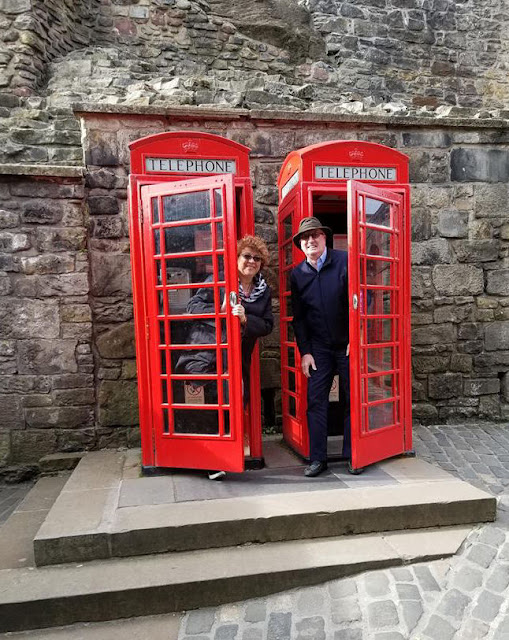 Charles started hybridizing in 1992. With the help of his mother, he opened Browns Ferry Gardens in 1994. He registered and introduced his first daylily, STRAWBERRY PATCH, in 1999 and it won an Honorable Mention (HM) Award from the AHS. Charles has introduced over 150 daylilies since then, and he has received 22 additional HMs from the AHS. 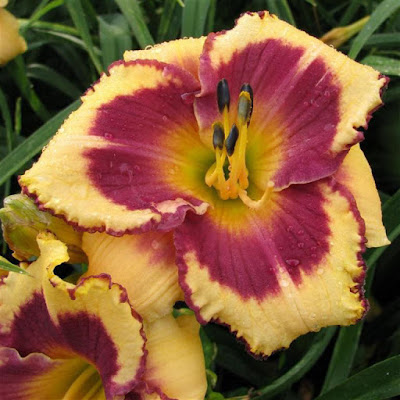 Charles loves big, round, ruffled daylilies—some with eyes and edges, and others just plain frilly—with great plant habit, good branching, and high bud count. He is most proud of THELMA DOUGLAS, named for his mother, registered in 2008, and introduced in 2009. THELMA DOUGLAS won an HM in 2011 and an Award of Merit (AM) from the AHS in 2014. 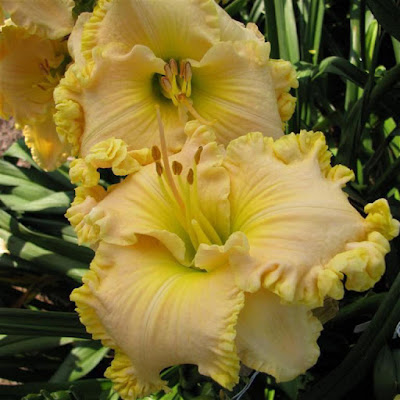 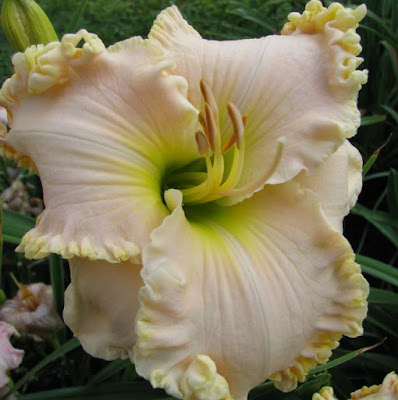 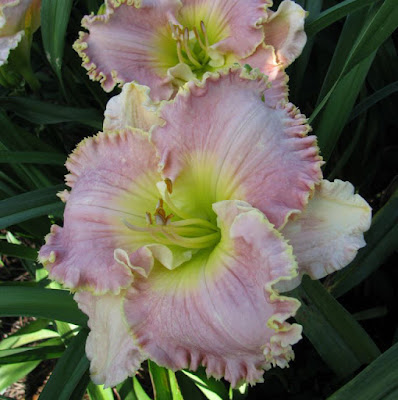 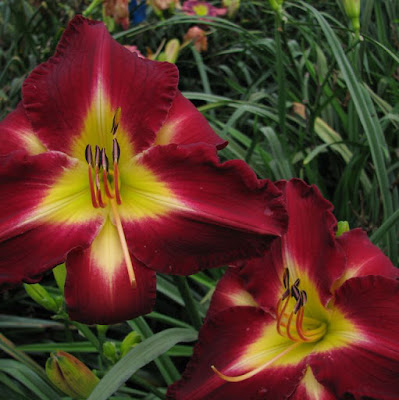 But wait—there’s more! Charles won the 2018 Region 15 Best Seedling award for his exquisite seedling 14-51 out of CYNTHIA DAWN X DAVE MCGHEE, which will be a future introduction. Congratulations, Charles! Seedling 14-51's parents are named for Charles and Heidi's daughter Cindy and son-in-law Dave. 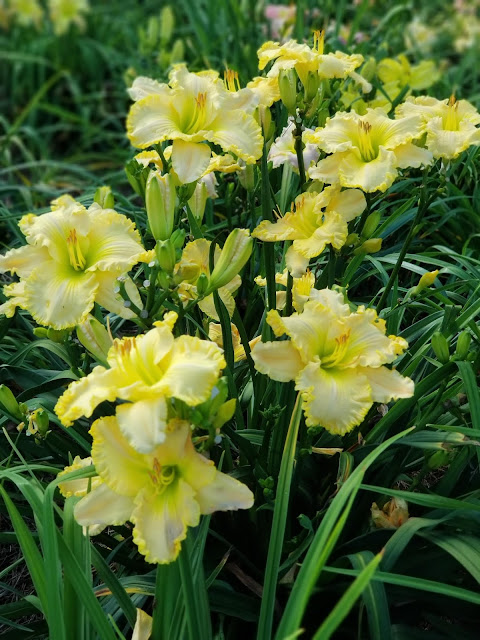 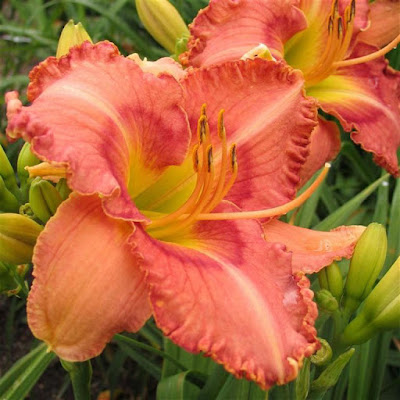 Heidi started growing daylilies in 1999 when she selected five daylilies for her garden. When they bloomed, Heidi was hooked and ordered more daylilies online. There she discovered a whole new world, including chat rooms and clubs. She started dabbing pollen in 2003, but was restricted by too small a yard.

Heidi moved her garden, her dogs, and herself to Browns Ferry Gardens in 2006, where she started hybridizing in earnest. Heidi hybridizes for patterns, appliques, and unusual forms with unique faces. Heidi sometimes makes some off-the-wall crazy crosses because she loves to see what will happen. Sometimes the kids are so-so, but other times, she gets outstanding results such as the to-die-for BOSS HOGG (2015). 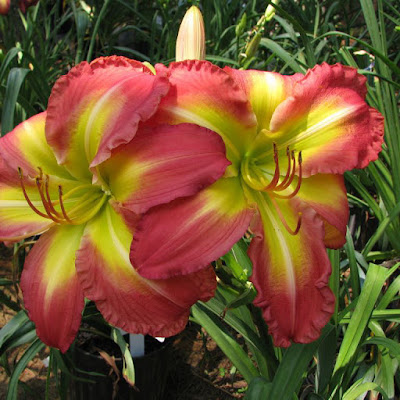 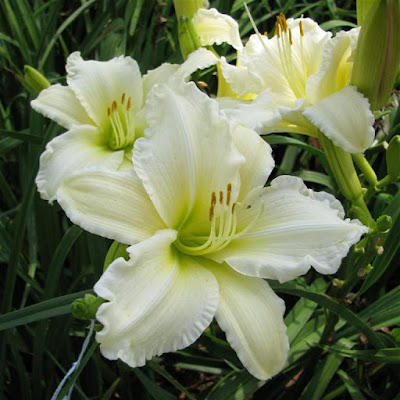 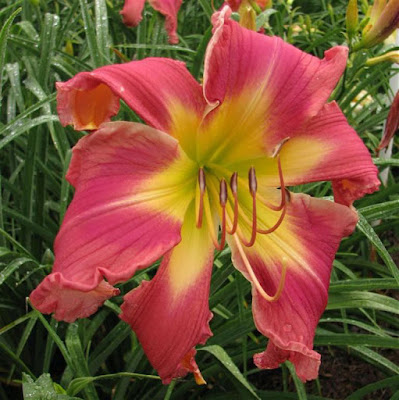 The beautiful and distinctive BOSS HOGG won an HM Award in 2018 with 82 votes. 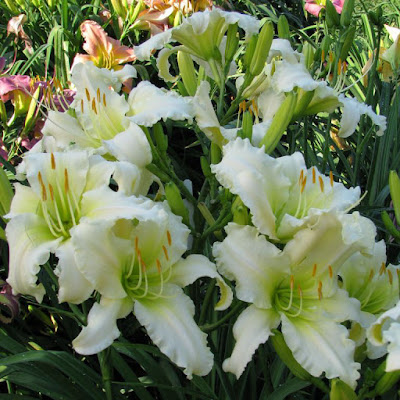 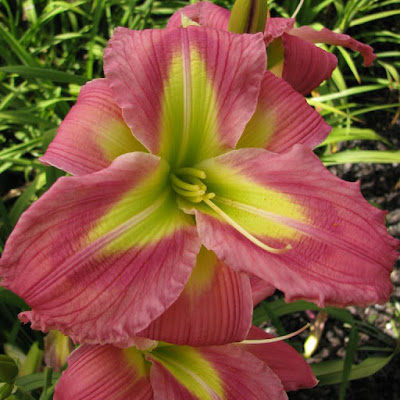 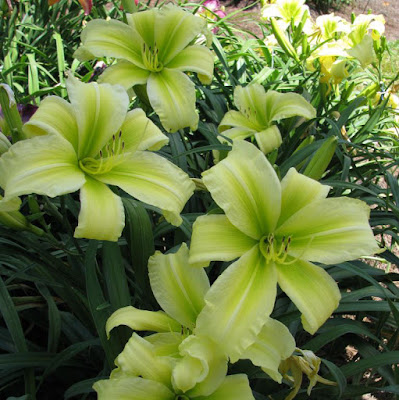 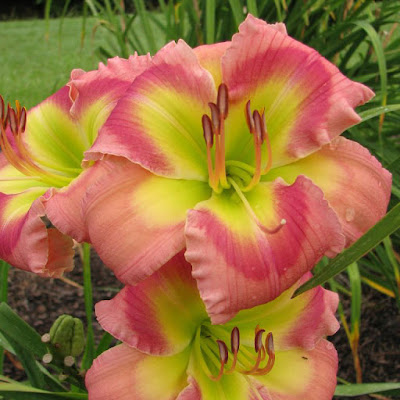 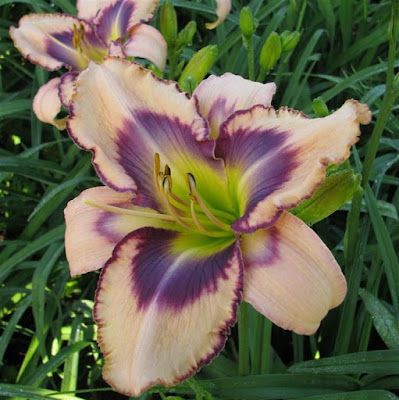 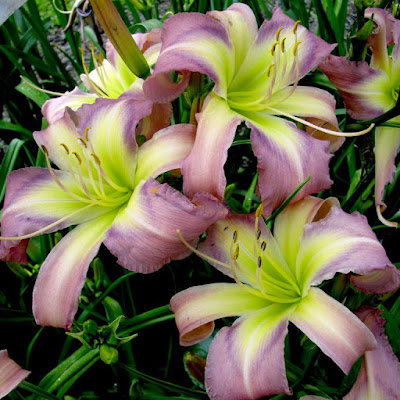 About the Daylilies at Browns Ferry Gardens

Join Charles, Heidi, and all of your daylily friends at the 2019 AHS Region One Tour on July 5-7 in Omaha, Nebraska. For information about this fun-filled, exciting event, click HERE for the schedule and list of tour and open gardens.

Don't let the only thing missing be you!
Posted by Mary Baker at 11:39 AM No comments: