Bryce Farnsworth of Fargo, North Dakota passed away during the evening on Thursday, September 13, 2018 after a sudden and unexpected heart attack. 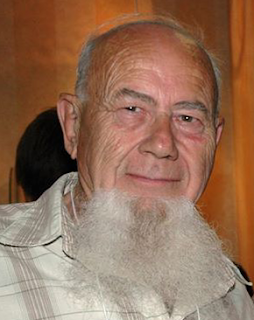 Bryce Farnsworth served Region One of the American Daylily Society in many capacities. He became AHS Region One Historian in 2002 and became an AHS Garden Judge in 2005 and continued in these positions until his death. He faithfully attended annual regional meetings until 2018, when hospitalization with pneumonia forced him to cancel. He donated many daylilies to several regional meeting auctions, regional Internet auctions, and regional mail auctions over the years. Bryce also donated daylilies to new daylily clubs within Region One to get them started, and he donated daylilies to several club bargain sale tables.

Bryce’s personal garden was an AHS Display Garden. Bryce hybridized daylilies. He was a mentor to newbies, and welcomed them to the daylily world

Most significantly, Bryce was a daylily advocate. He was passionate about North Dakota State University's historic daylily, iris, and other plant collections in Fargo. He contacted me to save NDSU’s historic and modern daylily collection, iris collection, AAS and other display gardens from demolition (the entire area was to become a parking lot for the new College of Business Administration building).

Bryce and I teamed up with NDSU's Barb Laschkewisch; Karen Schock; and the late Janice Dehod, President of the new Canadian Prairie Daylily Society in Winnipeg, Manitoba, Canada. We all met in Fargo with NDSU President Dr. Joseph Chapman and Vice President and College of Agriculture Dean Pat Jensen to explain the value of the AHS Display Garden’s historical collection with its rare cultivars and attempt to save these collections and keep them accessible. Our efforts were successful. We made such a good impression that Dr. Chapman canceled the rest of his meetings for that day and led us on an impromptu campus tour. More meetings of a happier nature followed. Dr. Chapman created a brand-new alternate campus entrance with much larger space where all the gardens were relocated. 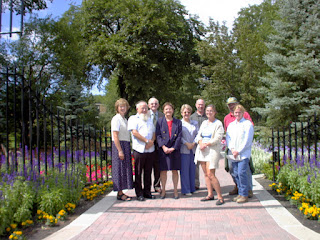 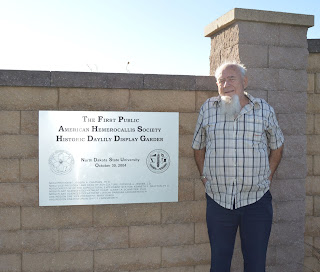 The Display Gardens at NDSU

Rich and I visited NDSU’s public gardens on Friday morning, September 21, before we returned to Omaha. It felt like Bryce was there, walking the gardens with us. The first thing we saw was the NDSU Agricultural Experiment Station sign below. Beyond this sign are the All-America Selections Display Garden beds. The AAS Display Garden beds were full of ornamental annuals providing a a palette of lush, gorgeous flowers in a beautiful setting. 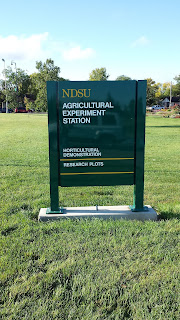 NDSU's gardens are located at 1200 18th Street North in Fargo
Next we walked through a display area featuring a variety of hardy perennials. Many were in bloom, while others such as Baptisia displayed lovely foliage.

Beyond the perennials area is a large iris bed and then daylilies—lots and lots of daylilies. The daylily garden consists of two large areas—the AHS Daylily Display Garden containing modern daylily cultivars, and the AHS Historic Daylily Display Garden featuring historic daylily cultivars and daylily species. The entrance to the AHS Historic Daylily Garden is marked with the following sign. 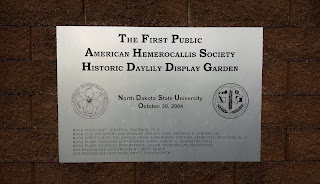 Not a weed was to be seen anywhere. Our visit took place during very late bloom season. Only a couple of the species daylilies and almost none of the modern daylilies were in bloom. We were surprised to see several historic daylily cultivars in bloom. One cultivar caught our eyes from several beds away, a tall, well-branched cadmium yellow. We got a closer look and the cultivar was none other than Arlow Stout’s diploid AUTUMN KING (1950). Scapes are registered at 54 inches tall with 3 inch blooms. The large specimen clump is in an unprotected bed and scapes are quite erect (with no leaning). Scapes are well-branched with many nicely spaced buds. 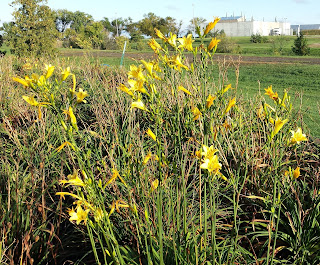 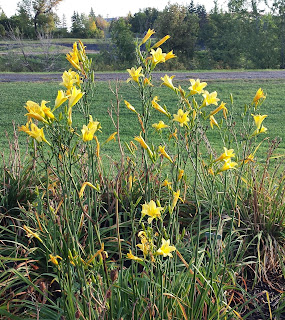 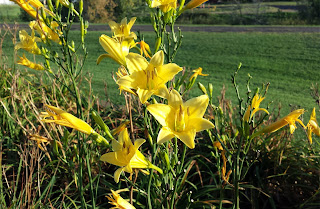 Closeup of AUTUMN KING (Stout, 1950) blooming on September 21 at NDSU

Bryce was proud of his Norwegian heritage, and one of his favorite historic diploid cultivars, NORWEGIAN LASS (David F. Hall, 1955) grows at NDSU. It was not in bloom at NDSU this late in the season. Bryce gave me NORWEGIAN LASS, and it will always have a place in my Omaha, Nebraska garden. 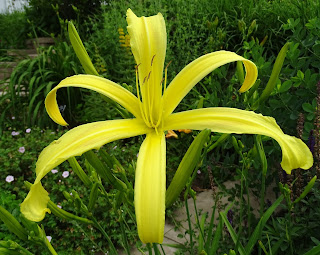 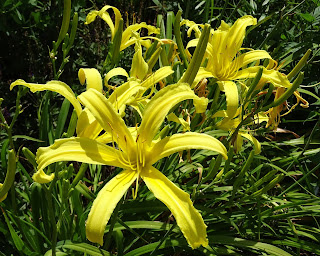 NDSU applied for and received a grant from AHS to establish a Lenington All-American award winners bed. Bryce and I worked with Oliver Billingslea, AHS Region 14 Director and Chair of Special Projects. Oliver convinced AHS that North Dakota State University was a good place to establish this bed (NDSU had all but 17 of the award-winners). The AHS grant helped NDSU complete the Lenington All-American collection. AHS members from Region One as well as from other regions generously donated many of the missing cultivars. NDSU created a new bed in a prominent location to house all the award winners. Part of the grant paid for a bronze sign labeling the Lenington All-American Bed, which thanks AHS for funding the bed. 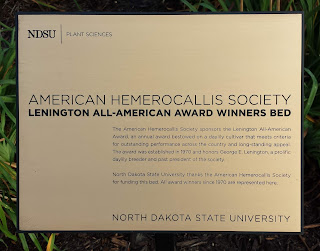 During our visit, we saw that eight of the Lenington All-American award winners were lost over winter. AHS members from Region One and other regions, please consider donating these cultivars to NDSU next spring.

Bryce Farnsworth’s work at NDSU was widely recognized. On Friday, October 24, 2003, Bryce received the prestigious Prairie Garden Award for Excellence for 2003. Presented by the Prairie Garden Committee, this award is for excellence in horticulture. Bryce was the fourth person to receive the Prairie Garden Award for Excellence and he is the first non-Canadian award recipient. Bryce received this award during a ceremony at Assiniboine Park in Winnipeg, Manitoba. Click HERE for more information. 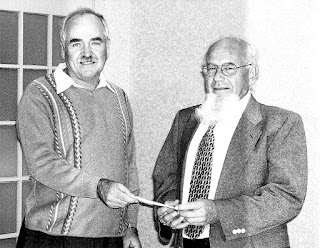 Bryce received the AHS Region One Service Award in 2009.

Bryce was a close friend, intelligent, with a heart of gold and a wonderful sense of humor. I was honored to name one of my best daylily registrations for Bryce in 2013. How I will miss him! 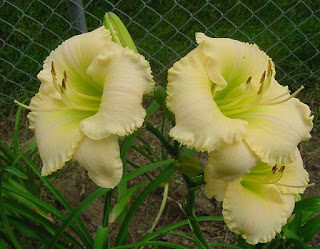 I am happy that Bryce's legacy will live on in the daylily gardens he loved so much at North Dakota State University.
Posted by Mary Baker at 10:39 PM 2 comments: